You may not have heard of the word "arthropod" but you are certainly familiar with at least some members of this group: the insects. While insects make arthropods the most diverse phylum, arthropods also contains many other groups. Arthropods can be tiny (fleas) or fairly large (lobsters). They live in a variety of habitats: from the polar waters (krill) to the top of the trees (beetles) through arid deserts (scorpions). 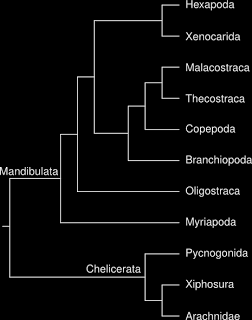 First, the authors confirm the results of previous DNA-based studies showing that the myriapods (the group which includes the centipedes and the millipedes) are not directly related to insects, and thus, that these two groups invaded land independently. It has been proposed that myriapods and insects were closely related because they both used special organs to breathe air. Furthermore, the myriapods are not directly related to the Chelicerata (spiders, scorpions, horseshoe crabs, mites, ticks) but belong to the Mandibulata (all the other arthropods). 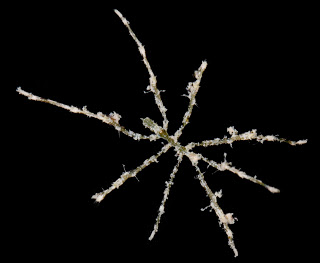 A pycnogonid from Lizard Island, Australia
Second, the closest relatives to the insects are a group of rare arthropods that the authors grouped under the new name of Xenocarida ("strange shrimps"). This new group unites two classes of arthropods that have only been recently described. In particular, the Remipedia were described in the 1980's and are only known from a few places (the Bahamas, the Canary Islands, Mexico and Cuba) where they live in caves. This illustrates the issue of what is called "taxon sampling" when scientists try to infer the relationships among organisms. If the authors didn't include these groups, the conclusions of their study would have been different, and some other arthropod group would have been mistaken for being the closest relatives of insects. Furthermore, it also illustrates the importance of habitat conservation and field work to preserve and discover species that can help unraveling the tree of life.
Link to the study:
More blog articles about the study: