Part of the lab is currently in Guam because of sea cucumbers.

In the context of the PEET project, we brought together 15 sea cucumber specialists and students -- from 10 countries -- in Guam to share knowledge about field and lab techniques for taxonomic studies of our favorite echinoderm group. We are now half-way through the workshop (it started on June 7th) and we have been very busy.

Our days are filled with field trips where we collect sea cucumbers in their habitats, time in the lab where we dissect the animals collected and look at their ossicles and time in the classroom where sea cucumbers specialists give lectures and students present their research. 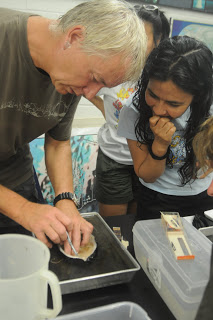 We have been really successful in the field and found several species that haven't been recorded from Guam before, and even maybe a couple of new species. There are two main reasons for these new records.

First, it highlights the progress that the PEET project has made since it started. By visiting museum collections to find type specimens, by collecting sea cucumbers in many places to understand morphological variation in species and by sequencing all this freshly collected material, we have a better idea of the characters that are useful to identify sea cucumber species and we have refined our understanding of some enigmatic species. For instance, there is a genus of sea cucumber called Labidodemas that live among coral rubble in lagoons. In the past, most Labidodemas were assigned to a species called semperianum. The reason is simple, most Labidodemas species look almost alike: they are whitish, have long tube feet on the ventral side and a dark red/brown coloration around the anterior and posterior ends. However, by looking at their ossicles (microscopic skeletal elements found in their skin), it turns out that it is fairly easy to identify the other species of this genus. During the workshop, we thus recorded for the first time in Guam the species called Labidodemas pertinax. By looking carefully at the live specimen, we are now able to tell the two species apart.

The image on the left is Labidodemas semperianum and the one on the right is Labidodemas pertinax.  Can you see the difference in the color of the tentacles and the tube feet? (click on the images to enlarge)

I'm sure we'll catch many more interesting things before the end of the workshop and I'll keep you posted!