I'm currently in Papua New Guinea, with John (the Slapcinsky kind) where we are participating to the expedition "Our planet reviewed" organized by the Muséum National d'Histoire Naturelle in Paris; and the Institut pour la Recherche et le Développement. In the following weeks, I'll try to post pictures and natural history stories about the marine invertebrates we are finding.

When it comes to plants, it is not uncommon that a small part is used to regrow a full organism. Gardeners have used this property to multiply and spread varieties of fruits and vegetables for centuries. For many species, a small branch, a leave or a root, placed in the right conditions, will give rise to a fully grown plant that will produce flowers and fruits. The plants obtained by this process are clones of their parents, they have the exact same genetic material. Many species of plants use this mode of reproduction in nature to spread. Because there is no exchange of gametes, this is referred to as asexual reproduction.

In the animal world, asexual reproduction is not very common. As I've previously mentioned, a particular group of rotifers have championed asexual reproduction. In other groups, like colonial organisms such as corals, asexual reproduction and growth are tightly linked. The colony grows by adding new individuals. If for some reason, one or a few individuals get separated from the colony, they will be able to go on with their lives and create a new colony of their own. A particular group of flatworms (planarians, class Turbellaria) have the amazing ability to regrow a full adult animal from a single adult cell (you can read more about it here). They use these regenerative abilities to reproduce asexually. They split themselves in halves, and each part regrow what is missing.

For larger and more complex animals, it is however much more uncommon to be able to regenerate the full animal from a part. Echinoderms are an exception. Some sea cucumbers can do it, but the most striking examples come from the sea stars in the genus Linckia. These sea stars can drop off an arm and from it, it will regrow a complete animal.

In the first few days of the expedition here in Papua New Guinea, divers have been bringing back many specimens of Linckia multifora. This colorful sea star comes in shapes that does not match their names. Instead of looking like stars, they often look like comets. 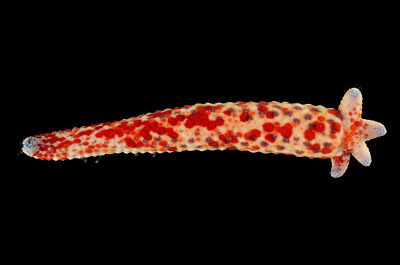 From the "tail" of the comet, the arm that was dropped off, 4 arms are slowly growing back to form a new complete sea star. As the process continues, the little arms grow bigger, and they will eventually end up looking like stars again. 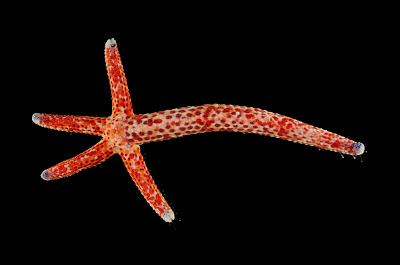 However, the process is not always perfect, and it is often possible to say if a particular individual is the result of asexual reproduction. If you look more closely at this sea star, you can spot that it has 2 anuses (yellow arrows) and 2 madreporites (blue arrows). This is clearly the signature that this individual is the product of asexual reproduction. 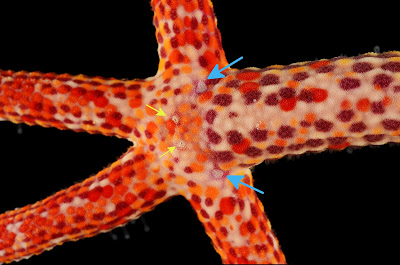 Sea stars can probably undergo asexual reproduction more easily than other animals because they have most of their organs repeated in each of their arms. Also, they don't have a centralized nervous system, it would probably be a trickier thing to do if they also had to regenerate a full brain. Because of the position of their mouth, it is also one of the first thing to be regrown, so they don't have to starve for too long before they can feed again. If many species of sea stars can regrow a missing arm, only a few can, like Linckia multifora, regrow a full animal from just an arm.