Alfred Russel Wallace was a British naturalist who lived at the same time as Darwin. His travels to the Amazonian forest and the Malay archipelago led him to articulate, independently of Darwin, the theory of evolution by natural selection. Darwin and Wallace co-authored the first papers on the topic in 1858.

A year later, he published a paper where he described how islands in the Malay archipelago (now Indonesia), separated only by a few kilometers are vastly different. He noted how little overlap there was in the species of birds and mammals across these islands. The fauna on the islands on the East were much more similar to Australia with marsupial mammals (e.g., kangaroos, koalas), while the islands on the West were more similar to Asia with placental mammals (e.g., mice, deers). This sharp break in the fauna later became known as "Wallace's line".

These two areas have different fauna and flora as they evolved in isolation for long periods of time and have been close to each other only for the last few million years.

Many groups of plants and animals show a similar pattern with groups found on one side or the other of the line but rarely on both sides. One of the exceptions is the Livistoninae, a group of palm trees that has many species on both sides of Wallace's line. In this paper, we try to understand how this pattern, which contrasts to most other species, came to be. Did species crossed the line often or rarely? Did they cross the line recently or a long time ago? It turns out that each of the three genera that are found on each side crossed the line only once and relatively recently (about 8 million years ago). However, the species that managed to establish themselves on the West side of the line, underwent higher diversification rates compared to the species living East of the line, leading to the distribution pattern we observe today with 302 species East of the line and 243 species West of the line.

You can read the full article here. 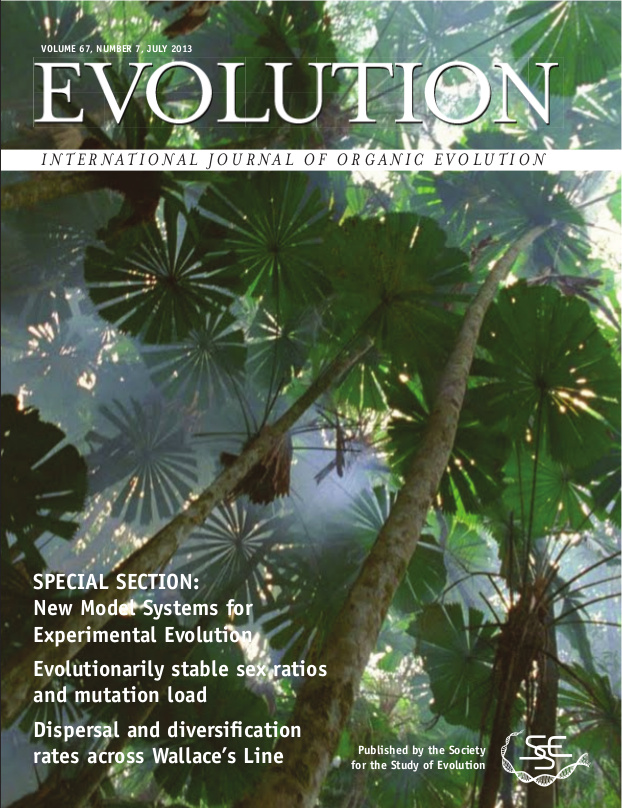 Our article makes the cover of Evolution (July 2013)! A Licuala ramsayi stand in northern Queensland, Australia. This is only species found on Australia and is representative of the fantastic radiation in Sahul region of Southeast Asia. In this study we inferred that each of the three genera found in Sahul crossed Wallace's Line only once and relatively recently at about 8.5 Ma. In addition, at least two of the three dispersing genera underwent an elevation in their diversification rate leading to high species richness on each side of Wallacea. Photo by J. Dransfield.