Crown-of-thorns (Acanthaster planci) are sea stars living on coral reefs. They can grow very large (more than 50cm/1.5ft in diameter) and they feed on corals. Most of the time, they are not very abundant. They are usually not rare and it is not unusual to see a few during a dive. However, sometimes, for reasons that are still misunderstood, they can become very abundant. So abundant that they cover and eat pretty much all the corals on the reef. For this reason, crown-of-thorns outbreaks are one of the major natural disturbances affecting coral reefs along with cyclones.

In this paper, we document the dynamics of the expansion and spread of a crown-of-thorns outbreak, and its consequences on the benthic composition (the abundance of the corals) and on the fish that depend on corals. This impact of this outbreak was even more pronounced as it was followed by a cyclone that reduced even further the coral cover. The coral cover dropped from 40% to 5% (and even less than 1% in some parts of the island) and the butterfly fish population were considerably reduced once most of the coral was gone. Look for yourself how much the landscape had changed in less than 3 years. 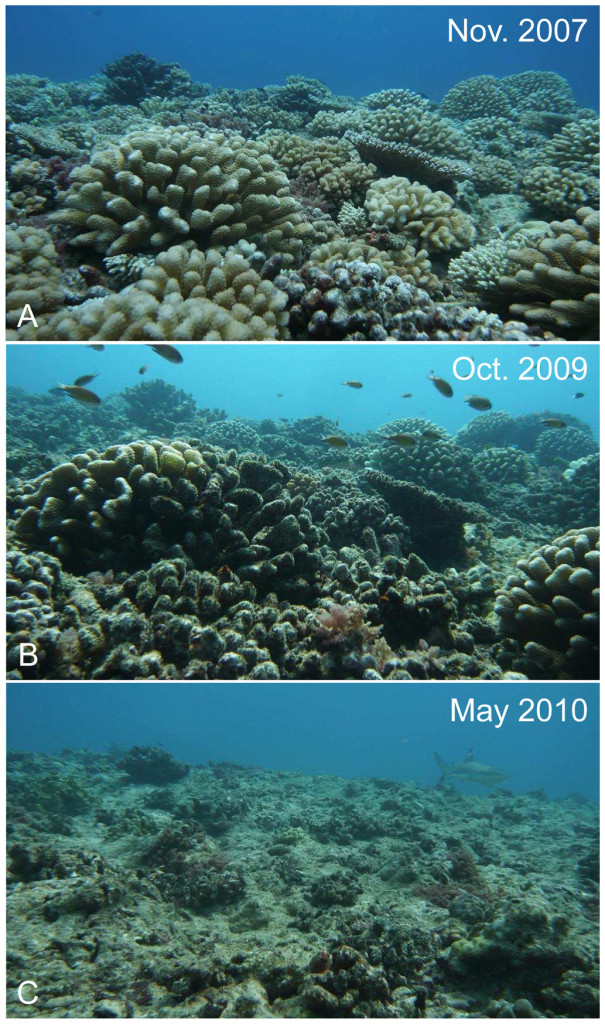 Reduction of the coral cover on the reef slope of Moorea between November 2007 (before the outbreak) and May 2010 (after the outbreak and the cyclone). Click on the image for a closer look.

It looks bad, but all hope is not lost. It's not the first time these events happened. Several times in the past, the coral cover on Moorea had been reduced to very low levels, but corals bounced back. In a previous paper, we showed that it took about 10 years for the corals to grow back to their original levels, but the community composition changed quite a bit. It will be interesting to follow the progression of the recovery on the reef to see how different the community will be this time around.

This paper has been published in PLOS ONE, an open-access journal, which means that you can read it freely.